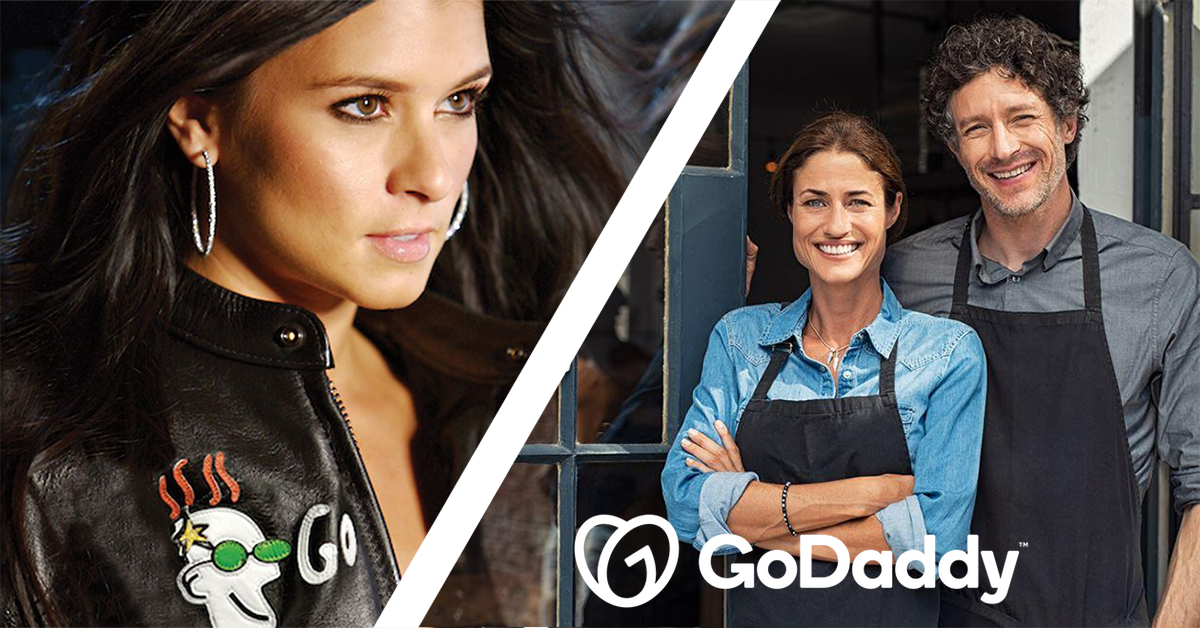 From Playmates and Puppy Mills to Small-Business Superhero

Over the past several months, I’m sure you’ve had your fill of inspiring TV spots reminding you that “We’re all in this together.”  Me, too. But back in March I noticed one commercial that stopped me in my tracks. I admit that Donald Sutherland’s smooth voice-over did a lot to draw me in. But even more attention-grabbing was the brand behind the commercial. It was GoDaddy.

You know. GoDaddy… that brand from the early 2000s that seemed to target testosterone-driven 20-something boys. Perhaps in your memory banks lives a recollection of racy commercials for what you thought might have been an adult store.

THIS new TV spot was not from THAT version of GoDaddy. The change was so jarring… such a 180 from where they had been before… I had to take a closer look.

The Essence of an Experience Brand

Through this new, #OpenWeStand TV campaign, GoDaddy is building strong emotional connections with customers AND with viewers who don’t even have a small business. They’re achieving this by dropping audiences into the visceral experience of opening the door to your business for the first time. The spot elicits a range of emotions wrapped up in the pursuit of your passion. Narrator Donald Sutherland even seems to get giddy in the middle of it all.

Some of you may still be stunned that THIS brand is the same as that old, seedy GoDaddy brand. So let’s look at the history of GoDaddy’s marketing campaigns as a fascinating case study into the way brand positioning can shape a brand’s public persona. And how that persona can be adjusted—sometimes quite drastically—over time.

Launching Out of a Cannon

First impressions stick. That’s why we prepare so carefully for brand launches. Usually, you position your brand to connect with audiences in ways that inspire action and build positive brand equity. Effective branding teams lay out a vision that buyers will want to be part of. GoDaddy’s early positioning (IMHO) wasn’t so carefully planned.

GoDaddy was established by Bob Parsons in 2003. His vision was to radically shift the global economy toward small business by empowering people to easily start, confidently grow, and successfully run their own ventures. The technology company’s early advertising didn’t exactly communicate that vision.

The first high-visibility GoDaddy TV spots aired during the 2005 Super Bowl. Their shocking sexualization of a former playboy model caused then NFL COO, Roger Goodell, to ask the network broadcaster (Fox) to pull the ad during the second half of the game. Over the years, most of GoDaddy’s racy commercials could only be viewed on its site. Those that made it to television often had extended versions that shamelessly pushed viewers to go to the site.

For the 2005 Superbowl, GoDaddy had network broadcaster approve its TV spot in advance. But the ad proved too racy for then COO Roger Goodell who asked Fox not to play the ad in during the second half as originally contracted.

Click the video at left to play the ad. While it IS safe for work, it’s not the kind of content we would see in broadcast advertising today.

That’s certainly a clever way to get people to go to your website. So does it really matter what tactics we use? Is that our goal… just getting people to the website?

Some people would say yes. But your advertising builds both a brand image (snapshot) and brand equity (long-term affinity). It connects your target audience with a feeling for who you are and why they should work with you. It communicates the special sauce of your company.

GoDaddy’s scandalous ads made the brand and its CEO renowned for being sexist. Unfortunately, many people didn’t know what the company was trying to sell. Many, like me, thought it was a cheap and demeaning sell-out.

I’m the father of three incredible women. They were in their high school and college years at that time. I personally detested GoDaddy and advised clients to steer clear of the brand. GoDaddy didn’t fit the image of real women… or the men around them… that I wanted my daughters to have to struggle with. I more or less forgot about them from that point on.

Were other people seeing this? Or was it just me?

When Your Brand Image Relies on Controversy, Mistakes are Less Forgivable

Other people, however—people who didn’t notice the ugly pattern, or who could overlook it—went to the GoDaddy website. And by 2015, GoDaddy had 13 million customers.  But in that Super Bowl too, they went too far. Golden-Retriever-puppy-mill too far. After previews offended puppy-lovers everywhere, the brand pulled the 2015 Super Bowl commercial. Most people didn’t believe them when they claimed it wasn’t a public relations stunt.

GoDaddy’s 2015 Superbowl ad went in a different-but-equally-offensive direction. This time they went for a cute puppy-dog theme that flipped to a cruel joke at the end.

Previews were so negative that they decided to self-censor, before game day.

When you rely on controversial advertising, you can’t build trust with your target audience.

Even if you actually have a memorable brand or even a superior customer experience, your prospects haven’t yet had that experience. Shallow brand equity supporting customers who thrive on deception can’t help, no matter how much attention it drives. The public GoDaddy was reaching became less likely to convert after they expanded the scope of their offensive promotions.

Picking Up Your Brand After a Major Wipe Out

Rebounding after a major, public-facing misstep takes time. An apology may sway your loyal customers, but how do you gain the trust of people who don’t know your brand yet?

You go back to some semblance of values.

You re-evaluate your messaging to align with the attitudes of your target audience.

You show them how you have helped people just like them and thus understand their needs.

GoDaddy found its path to recovery by November 2015. Its next round of ads—actually videos that ran into the 2.5-minute range—acknowledged small business owners who were quirky, tenacious, and hardworking.

In this 2018 video, which played to the millions of followers that GoDaddy had already garnered, we met Johanna, a lady who made hats for cats. It recognized its customer and focused on who they really were. While still pushing a satirical character, GoDaddy let go of the clickbait and focused attention on the small business owner.

A Purpose-Driven Brand Will Always Win You Friends

These days brands are expected to demonstrate an awareness of world issues and empathy for their target audiences, in messaging and in practice. If your company doesn’t have a purpose, you don’t stand a chance in the market. Consumers and employees crave brands with meaning and the best product.

Good marketing connects with potential customers and makes them want to be a part of what you’re doing. It highlights the tools and features that make your product unique and puts your customers’ desires within reach. Nuanced campaigns target the needs of distinct market areas whether that’s a segmented digital campaign or website versions that speak to different countries you serve.

Keying into a New Formula

In 2019, Ayesha Curry was one of many cultural icons who shared their stories in the “Make the World You Want” campaign. Chief Brand Officer Cameron Scott said that the campaign was meant to spark “conversations within communities and get people talking.”

In 2019, GoDaddy got a little bit more real. In this 30-second spot, we had a chance to see Ayesha Curry’s GoDaddy experience through her own eyes. THIS was the sensual content that GoDaddy should have been sharing from the start… Sensations of food, color, sound, taste… Feelings about family, design, and personal expression.

Wow, that was refreshing.

The 2019 GoDaddy “Make the World You Want” campaign went on to feature strong, independent, bold entrepreneurs. These were NOT people who would allow anyone else’s opinions to hold them back. They were real and they were breaking out… with GoDaddy’s products of course.

And check it out… GoDaddy has taken the letters “G” and “O” and turned them into a heart as part of their logo! A love mark.

As it matured, the brand aligned its messaging with its vision as a business: to shift the global economy toward small business by empowering people to easily start, confidently grow and successfully run their own ventures.

GoDaddy’s 2020 campaign “Entrepreneurial Spirit of Small Business” featured real small business owners bringing their dreams to life through GoDaddy. Again, the goal was to inspire and empower business owners both through messaging and through the technology that the brand provided.

“Look Mum No Hands” (LMNH) is a bike shop / café / bar at 49 Old Street in London… for real… visit them here. In January, 2020, GoDaddy released this 30-second TV spot featuring LMNH to show how business owners are bringing their ‘brick and mortar’ to an online audience.

And so we come full circle. When our Covid-19 pandemic closed nearly every brick and mortar location on earth, GoDaddy quickly responded. With their #OpenWeStand campaign (the one that appears at the top of this post), GoDaddy pivoted their strategy to focus on business owners who were closing their shops and opening their home computers. The company stood behind its vision to empower its customers with tools, and it began offering resources free of charge to help small businesses stay afloat.

What We Can All Learn

Let’s not kid ourselves here. Players with a lot at stake rarely make moves without some environmental pressure. Yes, #OpenWeStand is now a global social movement, but so are #MeToo and #BlackLivesMatter. GoDaddy could not have survived with the brand that we knew 15 years ago, just as we’re seeing brands like Uncle Bens, Aunt Jemima, and Land O’Lakes rethink their outdated brand images today. What GoDaddy did with its #OpenWeStand campaign was the embodiment of what all brand managers need to be doing, what we all need to be thinking about all of the time.

Our brands help buyers envision experiences with us from the first touch of awareness through to real experiences with people, tools, and services. We need to put ourselves in our customers’ shoes and identify their evolving needs, fears, and hopes. Then we need to show up as their trusted resource to help them get through whatever obstacles they’re facing.

It’s really never too late to pivot your marketing strategy. If GoDaddy can go from alienating people through advertising to hoisting its customer base up through motivational ad campaigns through a global pandemic, we can all start fresh.

I certainly am a GoDaddy believer now. 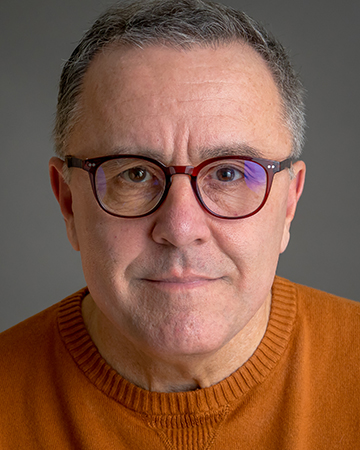 After many years as an agency strategy vp, marketing director, creative director, sales executive, creative writer, and data analyst, I acted on a vision to create an agile consortium of seasoned communications professionals who offer the flexibility to deliver high-impact solutions for large businesses and small.

Together, we deliver strategy, design, writing, photography, video, and digital production that offer competitive strength and confidence to businesses on the verge of a defining moment.

Are you ready to build engagement with customers, employees, and communities? Let’s talk about how Vergex can create a scalable solution to move your brand forward.